Who is Florent, Tawö’s father ?

The day we are born, we are called to fall into a pot that will give its color to our future.

Florent’s pot is all humanitarian!

Born into a modest family that knows the value of sharing and mutual aid, Florent was only 5 years old when he accompanied his parents on their various missions with the Red Cross. It is thus very early that he is in contact with social differences and the misery that goes with them.

This first approach was reinforced by his own missions as a young adult when he joined the army in the daily life of the Blue Helmets.

It was then that Florent plunged into the heart of the greatest misery, the most unbearable distress, particularly that of children: he was in Sarajevo.

One of his next assignments was in Bangui, the capital of the Central African Republic. Extreme poverty, malnutrition, disease, everything that assails and destroys the future of humanity gives this soldier the full measure of his commitment to the UN. These memories, which are more powerful than any press article, will never leave him and will drive Florent’s other commitments when he returns to civilian life.

No sooner had he become a real estate agent than Florent revisited his memories to change their content: he had given himself the means to help the most disadvantaged and to change the course of their destiny.

However, Florent, strengthened by what he has seen and experienced, refuses to concentrate his efforts on Africa alone: the whole world is shaken by the horrors of wars and famines; relief actions are necessary everywhere. And precisely, at the other end of the planet…

In the most moving way, Florent realizes that the famous family pot has opened for a new member: Toni, his 4 year old son!

All it took was a walk through the streets of Panama City’s Caledonia neighborhood for the child to ask his father a crucial question: “Why doesn’t that boy over there have any shoes?”

It took the simple and honest look of this little man for the obvious, masked by the habit of this “spectacle” of daily misery, to jump to the adult’s eyes and send him straight back to the memory of the children of Africa.

Another question becomes essential: how to put shoes on the children of Caledonia and elsewhere?

This humanitarian project took on several forms and never stopped evolving as Toni grew up.

“A pair bought = a pair offered”? It was a good idea, but it didn’t hold, because of the lack of reliable participants to engage the project and keep it afloat.

It was said that what would have stopped many others would not stop Florent in his visceral desire to “do something for the children”. He could also count on the eyes and energy of his son to support and push him.

7 years after the question of shoes, the Tawö project is finally finalized and is born in Angoulême!

The city of comics and graphics is naturally teeming with local skills in the field of digital and image. It’s decided, no more shoes, but a video game connected to the real world!

And here is Tawö, a young boy of Toni’s age, who sets off across the world to collect the ingredients of various menus.

“YOU play, HE runs, WE offer meals!” because before wearing shoes, a child of misery must be able to stand. 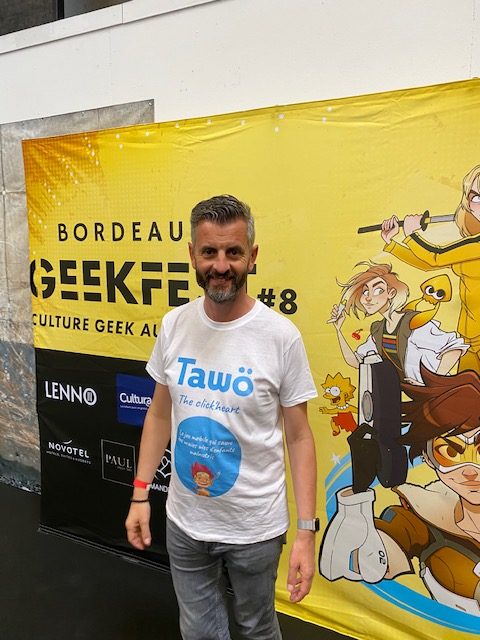 Article in the newspaper Charente Libre

Hit enter to search or ESC to close